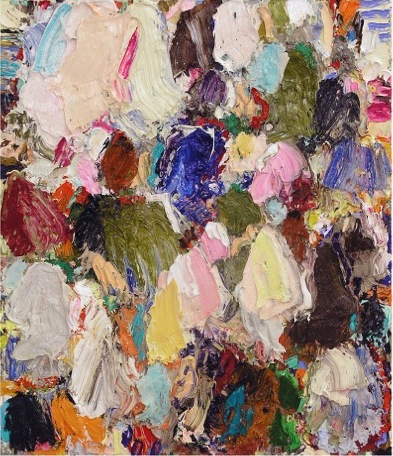 “Berlin is poor but sexy.” That was true once. Now, it is not just Berlin that’s poor, and poverty is nothing to be playful about anymore. “Berlin is poor but sexy,” was also meant as “Berlin is active, creative, vibrant.” What others have in terms of money, Berlin has in terms of potential. New ideas are coming into the city from all directions, new start-up companies are established, and wealth is growing slowly – while it declines in other areas of Germany. A trip through the Ruhr region leads us through dramatically impoverished cities and towns. Will they now become sexy? Is it worthwhile to look to Cologne, after Berlin has for many years usurped its place as the leading German art city? That is what this exhibition wants to do.

It is worthwhile to look to Cologne and Düsseldorf because good teachers work there who attract students with great potential. Martin Streit and Chen Ruo Bing studied with Gotthard Graubner. Chen (who was born in China in 1970) in 1992 came from China to Düsseldorf because of him, and has been living and working there ever since. Graubner’s way of painting with thin, runny paint that is used like ink was familiar to Chen, who was trained in Chinese ink painting. “The void of the painting is the source of its meaning,” is his motto. He sees paint not so much as a material, but as a carrier of light, the light comes forth from the centre of the painting, or at the margins of the round or oval shapes placed on the plane.

Martin Streit (born 1964 in Koblenz, lives in Cologne) turns light into his subject and foregoes brush and canvas. He uses a camera obscura case with a digital back, designed by himself, to produce his photographic works, shown in this exhibition. In the camera obscura, light comes into a dark space through a hole or lens and creates on the back wall a reverse, upside-down image. Streit transforms this physical phenomenon into a poetic one through different degrees of blurring. The result is a painterly image created just with light.

Early on, Gotthard Graubner anticipated the development towards lightness, but in his late work he took it back. Because for a long time, Cologne did not stand for lightness. “Heavy” was associated with the area: heavy industry, hard physical labour in the mines. No wonder that the older generation of artists included an element of heaviness in their work.

For Michael Toenges (born1952 Pfaffenhofen/Ilm, lives in Cologne) paint is an actual material with volume and density. His brush and spatula leave furrows, valleys, and ridges, and yet: despite the heaviness of the paint materials, the beholder gets a sense of a flying, floating dynamics. The massive brushstrokes reveal verve and energy, they strive towards the edge, they want to go beyond the painting, and the colours are light. Heavy does not have to be heavy.

Similarly, the raw stones of the sculptor Josef Wolf (born 1954 in Andernach, lives in Cologne), that seem like boulders, don’t reveal how heavy they actually are, when they stand, slim and elegant, before the beholder. Appearances can be deceiving.

Whenever a painter uses paint to make a line, he begins to create an appearance. But the paint itself has a realty, it has informed the life of the painter, also became his undoing, but the beholder doesn’t know any of this, he doesn’t see the real paint. That is Peter Tollens’ (born 1954 in Kleve, lives in Cologne) theme. He seems to say, “No illusions, paint is paint and nothing else.” And with every painting he paints, he seems to pose the question what paint is. The answer is in his work. A dialogue develops with every brushstroke. Space emerges, time passes and is captured, a structure develops and adds expression, values and convictions are reflected in it, the colour adds sound and atmosphere. By foregoing illusion and focussing on paint and colour, the painter shows us that paint and painting are the painter himself, they are part of his body, his emotions and perception. The painter cannot hide anywhere in his painting.